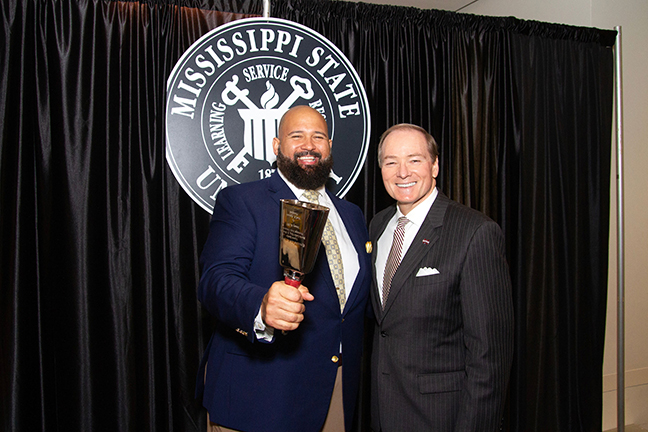 Lee Brand Jr., left, an MSU alumnus and the senior pastor of Faith Baptist Church in Bartlett, Tennessee, rings a cowbell presented by MSU President Mark E. Keenum after Brand’s keynote remarks during the 29th annual Unity Breakfast honoring the life and legacy of Martin Luther King Jr. Brand gave an ardent call to employ the principles of conviction, communion and compassion as part of any genuine effort to pursue unity. PHOTO: Leilani Salter | Office of the President

Mississippi State and Starkville community members celebrated the life and legacy of Martin Luther King Jr. last Monday [Jan. 16], kicking off with a special Unity Breakfast and continuing with a Day of Service.

Lee Brand Jr., a Nettleton native and MSU alumnus who has spent the majority of his adult life in Starkville, serving as pastor of Beth-el Missionary Baptist Church from 2002-2019, was the keynote speaker for MSU’s 29th annual MLK Jr. Day breakfast program. Now the senior pastor of Faith Baptist Church in Bartlett, Tennessee, he served as vice president and dean of Mid-America Baptist Theological Seminary from 2019-2022.

Brand said he was humbled to speak on the occasion honoring King, who fought for equal civil rights “not just for Black people, but for all people,” he said.

He gave an ardent call to employ three underpinning principles in any genuine effort to pursue unity: conviction, communion and compassion.

“When I speak of conviction, I’m speaking simply of those beliefs or opinions that we hold firmly,” Brand said. “And I really believe that we need to have a conviction about some things. And the first one is this: we need to be convicted about the worth of every single human being. No person is worth any more than any other person; but don’t twist it, no person is worth less than any other person—every individual in the human race has intrinsic value, and they are worthy of respect.” He said this conviction about human worth is easy to agree with in principle but can be difficult to execute in daily practice.

“If we’re not careful, we’re going to find ourselves categorizing people and assigning their value based on the way their convictions align with ours. We find it easier to work with those who think like us, view the world like us and want the same outcomes as we do,” he said.

“I think we should hold our convictions dear, but we should also not try to force anybody to think and feel and view the world the way that we do. If this is our aim, then we’re never going to achieve ‘unity’ because what we’re aiming at is ‘uniformity,’” Brand said. “We must be able to hold our convictions on any matter while respecting another person’s ability to hold theirs.”

Brand said communion -- sitting down and talking -- is the second core principle. “We get behind our ideological fences and we lob at each other. But seldom do we sit down and actually talk. We need genuine communion with one another. The challenge is to open lines of communication with people who don’t think like you,” he said. “It doesn’t mean you have to align with them, but those conversations help you appreciate them, even if you never approve of their position.”

Compassion, Brand said, is what ultimately stirs people to take action to make the world a better place. “I want you to think about why Dr. King is such a celebrated man. Why does the world pause today and say ‘thank you’?” he asked. “Because he was a man who saw affliction, and he was so stirred with affection, that he actually did something.”

Brand said it takes “absolutely no effort to leave something the way you found it” and “we will not change the world because we came to breakfast,” but rather he implored his audience to “be the kind of people that believe in something so deeply that not to do something about it is offensive to our own conscious.”

The Mid-America Baptist Theological Seminary graduate referenced Amos 3:3 in the Bible, which asks “Shall two walk together, except they have agreed?” Brand extracted his own point, “How can two agree if they don’t talk?”

MSU President Mark E. Keenum said the university -- the most diverse land-grant university in the Southeastern Conference and the nation -- is committed to service, as well as other values King exemplified throughout his life as a civil rights activist, humanitarian and pastor.

“Diversity enriches and empowers our university. Diversity displaces fear with confidence in others,” said Keenum, who noted that MSU has been awarded the Higher Education Excellence in Diversity Award and the Carnegie Foundation’s Community Engaged Classification for service.

“Dr. King personified values of character, values that we hold dearly at Mississippi State -- integrity, hard work and respect for all people,” Keenum said. “Values are the content of one’s character and, along with education, create a powerful force to change people and communities, and build better, stronger societies. I believe we all can contribute to the incredible legacy of Dr. Martin Luther King Jr.,” Keenum said.