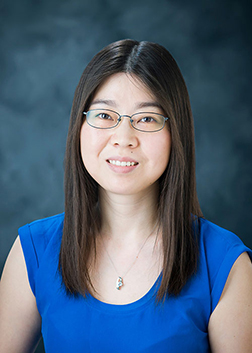 
An in-depth understanding of calcium-dependent heart diseases is aiding a Mississippi State faculty member in possible therapy development through a National Institutes of Health research award.

Bin Liu, an assistant professor in the Department of Biological Sciences, will use the three-year $422,652 award for her research -- “Exploring the role of mitochondria in dysregulated calcium handling in diseased hearts” -- as part of the NIH R15 program to support faculty research, expose students to research and strengthen the research environment of educational institutions.

Liu’s project focuses on how calcium -- a necessary mineral for life -- contributes to different forms of cardiac dysfunction and on the creation of mechanism-based therapies. While calcium enables blood to clot and muscles to contract, it empowers the heart to beat.

“Inside the heart, there are billions of cardiac muscle cells that contract and relax following changes in calcium,” Liu said. “Calcium concentration goes up and down inside these cells on a beat-to-beat basis.”

Liu said calcium signaling is a tightly regulated process that involves several calcium-handling organelles inside the cells, including sarcoplasmic reticulum (SR), the calcium store and mitochondria.

Liu’s NIH award will help her focus on how the interplay between SR and mitochondria shapes calcium signaling and contributes to different types of heart disease.

“We used two heart disease models, a genetic arrhythmic model and a metabolic disease model, that both exhibit abnormal calcium signaling in this study. We found that mitochondria play divergent roles in the two disease models to shape calcium signaling to contribute to the disease,” Liu said. “Understanding these differences is important for developing tailored therapies for different calcium-dependent cardiac dysfunctions.”

Angus L. Dawe, Donald L. Hall Distinguished Professor of Biology and head of the MSU biological sciences department, said Liu’s work is an example of the application of basic science research to “a very real problem.”

“By understanding how the heart cells behave at a molecular level, Dr. Liu will provide valuable contributions that can help direct the future development of treatments,” Dawe said. “This project is the third NIH grant recently funded here and will complement other recent faculty successes across many sub-fields of biology from other federal agencies, all helping to put MSU at the center of important biological research in the region.”

Liu has been an MSU faculty member since 2017. She received her bachelor’s degree in fundamental sciences from Tsinghua University in China. Liu earned her Ph.D. in biophysics, from Ohio State University where she also served as a postdoctoral researcher at Davis Heart and Lung Research Institute in the Department of Physiology and Cell Biology.

The Liu Lab at MSU is funded by the American Heart Association.

More details of Liu’s research group are available at https://bl1190.wixsite.com/liulab.

Part of MSU’s College of Arts and Sciences, complete details about the Department of Biological Sciences are available at www.biology.msstate.edu.