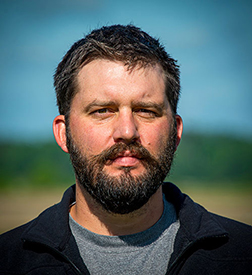 
An agronomy expert at Mississippi State is a selection this year for a major national honor from the American Forage and Grassland Council.

The award honors an individual under the age of 40 who has made a significant contribution to the forage and grassland industry.

A faculty member in MSU’s Department of Plant and Soil Sciences and researcher with the Mississippi Agricultural and Forestry Experiment Station, Morrison said he’s especially excited about the accolade because of AFGC’s commitment to striking a balance between producer profitability and environmental stewardship.

“This means a great deal coming from AFGC because they are a producer-driven organization focused on promoting production practices that are both economically and environmentally sound. The organization does a great job of connecting producers, educators, researchers and industry professionals so we can all work together to improve forage agriculture as a whole,” Morrison said.

While the Glade Valley, North Carolina native grew up with a love of the outdoors, it wasn’t until college that Morrison recognized agriculture as a potential career for himself. He attended Berea College, a well-known institution in Kentucky that offers free tuition. As part of that agreement, all students must work for the institution in some capacity. Morrison’s time working at the school farm ignited a passion for studying plants.

He earned a bachelor’s degree in agricultural natural resource management from Berea. He then earned a master’s in forage utilization and management from the University of Kentucky before enrolling at MSU, where he received his doctorate studying forage genetics and production. He now studies ways to tailor native and introduced plant species to be more resilient and adaptable through conventional breeding methods. He said he enjoys working with students to explore the versatility and durability of these species.

“By pushing the conventional limits of these plants, we can discover their value as a genetic resource. One of the joys of my job is training the next generation to responsibly manage these resources for human and environmental benefit,” Morrison said.

MSU Professor Brian Baldwin, who also studies forage management in the plant and soil sciences department, said Morrison is a fitting candidate for the award.

“Jesse’s accomplishments, which garner the respect of his peers and others, include directing meaningful research, mentoring students and working with clients as an exceptional agronomist, plant breeder and educator,” Baldwin said. “He has produced six refereed articles and a book chapter. He’s done an exemplary job mentoring students to present their research at professional meetings and through teaching a course in Grain Crops. His grantmanship is enviable. Recently, he applied for four Department of Energy grants and received all of them in addition to an USDA-NIFA Agricultural and Forest Research Initiative grant with Texas A&M.”

Baldwin also noted Morrison’s active participation in AFGC, as well as other organizations.

“Jesse participates in a number of professional societies, actively seeking out roles of responsibility, including secretary, vice president and president. Active in the AFGC for years, he works tirelessly with the members of the Forage Bowl Committee to make the competition an exciting event for both the students and membership,” he said.

For more about the College of Agriculture and Life Sciences’ plant and soil sciences department, visit www.pss.msstate.edu.