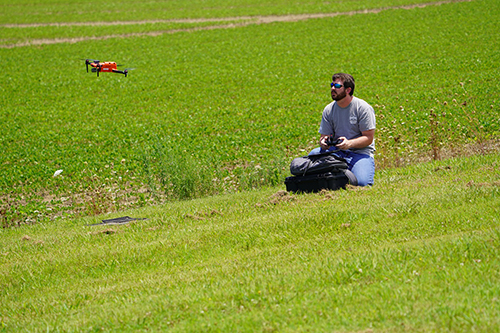 “Mississippi State University is a national research leader in many fields, and our foundational work with unmanned aircraft has positioned us, as this selection demonstrates, to help write the flight safety plan for this potentially transformational aspect of the aviation industry,” said MSU President Mark E. Keenum. “This designation further solidifies MSU and the state of Mississippi as a leader in unmanned aircraft systems, which will bring more academic, research and economic opportunities to our state.”

“Raspet has a rich heritage of aviation development and testing, and we’re building upon that foundation by providing the FAA with research needed to quickly, safely and efficiently integrate UAS into the National Airspace System,” said Dallas Brooks, Raspet director. “We’re proud the FAA has selected us as their UAS Safety Research Facility, and we’re looking forward to working together to ensure the benefits of this amazing technology are realized without compromising safety.”

Integrating UAS into the National Airspace System would enable manned and unmanned aircraft to safely operate side by side using many of the same air traffic management systems and procedures.

Issues Raspet has been and will be addressing in its role as the UAS Safety Research Facility include:

-- Validating and verifying results, recommendations and conclusions of UAS safety research from around the world.

-- Investigating technologies that enable UAS to accurately and reliably detect other aircraft and adjust the course of the UAS to maintain safe distances; successful implementation of these detect-and-avoid systems would permit UAS to safely operate beyond visual line of sight—a critical threshold for UAS to reach full potential.

-- Serving as a performance evaluation testbed for emerging UAS technologies.

MSU’s Raspet Flight Research Laboratory is the nation’s leading academic research center dedicated exclusively to the advancement of Unmanned Aircraft Systems. Raspet is the only institute in the world designated both as the FAA’s UAS Safety Research Facility and as official UAS Test Sites for both the FAA and the Department of Homeland Security. Home to a fleet of the largest and most capable unmanned aircraft in academic use, Raspet conducts UAS research on behalf of federal agencies and commercial industry alike, and it remains a world leader in composite materials research.